On my recent trip to Las Vegas I decided to undertake some night photography at McCarran International Airport from the top of the airport parking garages and a couple of other locations. The parking garages at McCarran are a popular location with aviation photographers during the mornings when, with northerly winds blowing, airliners and biz jets can be photographed with the casinos and hotels of the Las Vegas strip in the background as the aircraft get airborne. Night photography from the parking garages is a different proposition, as the terminal buildings restrict the view of the aircraft gates and ramp area.  However some of the gates and ramp areas are visible from the parking garages, one of which being the ramp area and some of the gates of Terminal 2, the current international terminal at McCarran.

One particular aircraft I was determined to get a decent photograph of at McCarran was the British Airways Boeing 747-400 that operates their London Heathrow to Las Vegas Service. The schedule for this flight sees it arrive & depart under the cover of darkness  during the winter months. On two consecutive nights I ventured to the parking garages with the aim of getting an image of the BA 747-400.

The 1st night I ventured to the parking garage, on initial push back the backdrop to the 747 was not particularly inspiring and I took some standard aviation photographs with the aircraft centred in the frame.  After the aircraft began to taxi, they came to a halt about 1000m from where they had started with the Luxor Hotel & Casino in the background for a few minutes while they resolved an issue. Quickly changing lenses I put the 70-200 on the camera and zoomed out till I had the aircraft near the bottom of the frame and the hotel visible in the background. My luck was in and I was rewarded with the spectacular photograph that you see above. This photograph was uploaded to Airliners.net  where it made 2nd top viewed photo of the last 24hrs on the day it was uploaded and subsequently was voted top of the Photographer's Choice award by my fellow photographers who upload to Airliners.net.


With the above image in the bag, I wasn't going to venture out a 2nd night until I noticed that the BA747 was in their Oneworld Alliance scheme and there was also an RAF Tristar at McCarran.  The Tristar would prove a trickier photograph to capture as it was parked in a different part of the airfield, and would involve trying to take a photograph through a diamond mesh fence that had a smaller opening than the diameter of my lens. As the saying goes, you've got to be in it to win it, so I ventured to get a photograph of the Tristar.  Zoomed out, I could get the whole aircraft in the frame, but was getting a horrible diamond pattern showing on the final image. Therefore I zoomed in on the forward fuselage area to minimize any diamond pattern. While the results are not as spectacular as the BA shot above, I am more than happy with the outcome. 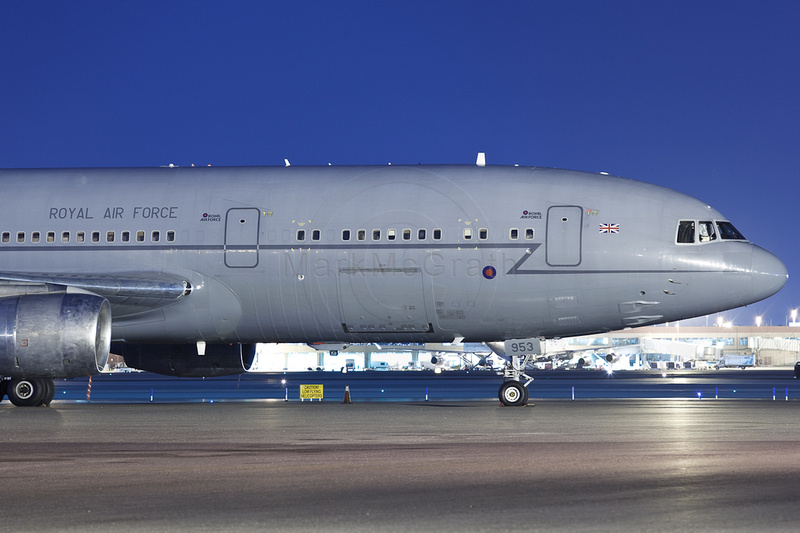 Hopefully this will give a little insight into these two particular images from McCarran International Airport of Brits in Vegas.